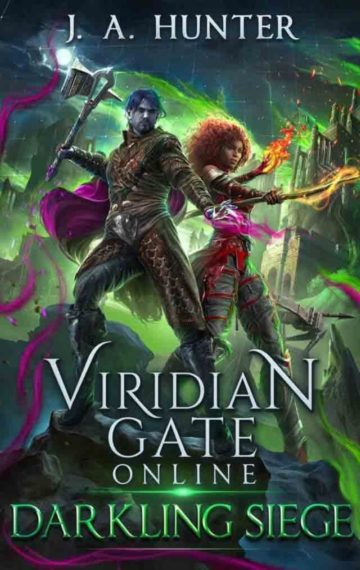 $5.99Buy NowRead A SampleSee The ReviewsSee The Full SeriesBuy The Audiobook

Not even gods are safe from the power of the fabled Doom-Forged weapon.

Grim Jack didn’t set out to be the leader of Eldgard’s united armies, but with dungeons falling one by one and hordes of Vogthar pouring into the material plane, it’s up to him to save both citizens and travelers from digital destruction.

His doomsday weapon will take him straight into the heart of Morsheim, but once there, even the combined might of the Empire and the Crimson Alliance might not be enough. He’ll have to uncover secrets buried for millennia just to get within striking distance of a death god gone mad, and the choices he’ll make will change him and the world forever…

From James A. Hunter the Bestselling Author of Rogue Dungeon, Bibliomancer (Completionist Chronicles Expanded Universe), and Shadowcroft Academy for Dungeons comes the seventh installment in the bestselling LitRPG Epic Viridian Gate Online! Jack’s adventures in a cutthroat virtual reality fantasy world will grip fans of Ready Player One and The Stormlight Archive alike. With over 350,000 copies sold, this is one series you don’t want to miss!