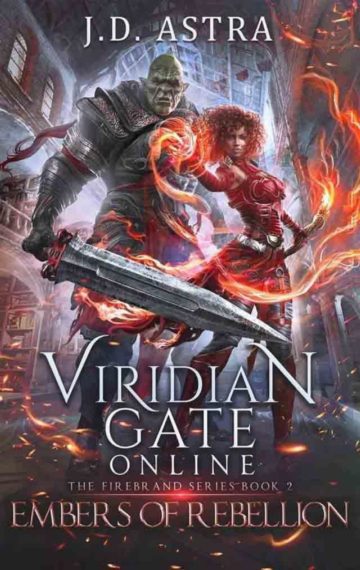 The theft of the drug lord Carrera’s Faction Seal has set Osmark’s empire-to-be ablaze with the hunt for Abby and Otto’s heads, but her quest to discover the truth about the ultra-rare item won’t wait. There are only days left until Earth’s destruction, and the Faction Seal plays some role in Osmark’s plan to rule over Viridian Gate Online, the immersive VRMMO game turned humanity’s lifeboat.

With nowhere left to turn in Harrowick, Abby and Otto have no choice but to flee to the rebel undergrounds of Alaunhylles—a fading light that was once a beacon of hope in the Imperial aligned city. They come seeking answers in the Grand Archives, but the rebels have their own problems, and their own priorities… Priorities that might just get Abby and Otto killed before they can find the answers they need.

The enterprising rebel Firebrand will have to dig deep to complete her quest or see all her hopes go up in flames in this next installment of the Firebrand series: Embers of Rebellion.