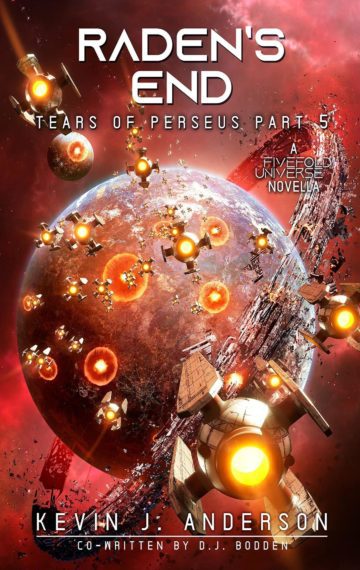 $2.99Buy NowRead A SampleSee The ReviewsSee The Full Series

They sent the right woman after the wrong man.

The person who seeks revenge digs two graves. Fifteen years ago, Arlette Kopca lost everything, her family was killed, and her world scarred forever, but now she has the murderer within reach. The only thing standing between her and Cal Raden is a Perseid Battle Group, and Arlette has them outnumbered two-to-one.

On the planet below, Cal Raden awakens after twenty years in a cryo chamber, betrayed by his closest friend, his identity stolen. He’ll have to choose between salvaging his reputation and denying the acts he’s accused of or harnessing the myth to protect himself and the planet because the Federal Fleet is coming, and they won’t stop until he’s dead.

Written by Kevin J. Anderson, internationally bestselling author of books in the Star Wars, Dune, and X-Files universes, as well as his Saga of the Seven Suns, and co-written by D.J. Bodden, creator of the FiveFold Universe, Raden’s End is a story of what it takes to find peace, mistaken identities, and the war that almost ended it all.