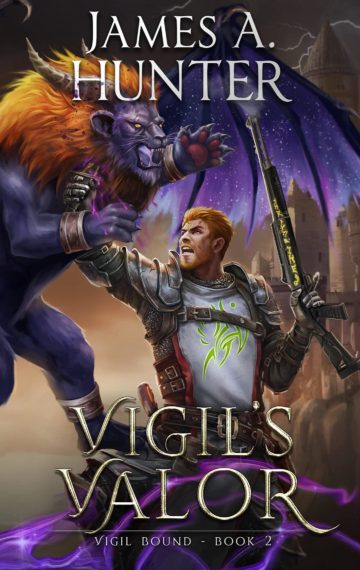 Listen to a sample
$5.99Buy NowSee The ReviewsSee The Full SeriesBuy The Audiobook

An impossible bounty. An eldritch horror out for blood. A murder that could kickstart a civil war…

After saving the people of Ironmoor, Boyd Knight thought he was finally getting a handle on this whole Vigil thing. Bounties were rolling up. Monsters were dying in droves. Plus, he convinced his chaotic pixie familiar, Renholm, to stop committing random acts of arson.

But defeating the fabled Hexblight of Ironmoor is child’s play compared to the tests Boyd will face in Wildespell, home to the Citadel of the Vigilant.

Something foul has infiltrated the city. Rampant fear is spreading like an infection and tensions are steadily mounting between the Vigils of the Citadel and the Royals who rule the Freehold province. Boyd’s been tasked by Raguel, the Five-Faced God of Justice, to put a stop to the killings before it ends in an all-out civil war, but there are powerful forces hellbent on seeing the downfall of the Vigilant. He’ll need to team up with a grizzled veteran and an unlikely crew of miscreants to find the answers before Wildespell goes up in flames.

Oh, and he’ll also need to figure out how to stop Renholm from stealing left shoes. Pixies are just the worst.